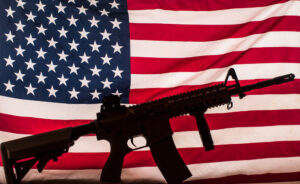 You cannot own, transfer, or have in your possession an unlicensed assault weapon or its simulation without breaking the law in New Jersey. New Jersey law requires a license for automatic firearms and other semi-automatic weapons with magazines that enable the weapon to rapid-fire or single fire per trigger-pull a round or rounds of ammunition. The law specifies illegal shotguns with a capacity to shoot more than six rounds, a shotgun with a pistol grip or a folding stock, a semi-automatic rifle with the capability to shoot more than 15 rounds from a fixed magazine, or a weapon converted to an assault firearm, including the parts to make a weapon into an assault weapon.

What is a Considered an Assault Weapon in NJ

An assault firearm is defined by its ability to contain a detachable magazine and folding stock or a pistol grip that extends noticeably below the weapon’s action, meaning the mechanism that loads, locks, and fires ammunition. So, for example, a rifle can shoot one or two bullets per trigger pull, referred to as burst fire. But a rifle that can shoot numerous bullets per trigger pull is an automatic weapon. An assault rifle can do both.

You want to avoid getting caught with a pistol, shotgun, rifle, or banned attachments in New Jersey. Illegally possessing an assault weapon may result in a second degree crime conviction, a $150,000.00 fine, and maximally ten years in prison without parole eligibility. Illegally possessing an assault weapon falls under New Jersey’s mandatory minimum requirements for certain crimes. If convicted of one of those crimes, you must serve the greater of minimally one-third to one-half of your sentence or 42 months. However, if you use an unlawful automatic weapon to further an organized crime scheme, your sentence includes five years of additional parole ineligibility. The long sentence for unlawful possession of an assault weapon subject you to the mandatory minimums dictated by the Graves Act. Thus, a judge must usually sentence you to the mandatory minimum prison term under the Act.

With such stringent penalties, one may wonder why someone would have an illegal assault weapon in their possession. Mostly, the difficulty of getting a license for an assault weapon is the reason and many people unwittingly come to New Jersey with an assault firearm that is legal in their home state. To be licensed, you must first apply for and be issued a handgun carry permit. To qualify for the permit/license, you must prove that public safety depends on your obtaining such an assault weapon license, which must be renewed every two years. And it is not an automatic renewal. You must apply for a license every other year when a prosecutor may approve your application if you own the weapon legitimately: as a valid gun club member or for target shooting practice. Lastly, if the weapon does not work, it is legal to own.

Clearly, New Jersey does not want residents to carry weapons capable of destroying lives and property in seconds. Lawmakers take the stand that the military needs automatic and semi-automatic weapons, but non-military firearms owners have no need for guns capable of destroying dozens of people within seconds. Gun club members and recreational users at designated practice ranges may find entertainment in automatic and semi-automatic weapons, and that is the reason for proper licensing, permits, and checks. And since an ordinary pistol, rifle, or shotgun can convert into a military-grade automatic or semi-automatic weapon, the law is stringent about illegal assault weapons. Unfortunately, not everyone is educated about what they can and cannot purchase or possess lawfully under New Jersey’s strict rules. An individual may be ignorant of the law, unaware that they have an illegal assault weapon, or may not be aware that their customized weapon is illegal.

If you or a loved one has been arrested for an assault weapon and do not have a license, you should immediately consult with an experienced weapons defense attorney that handles assault firearms violation cases. The criminal defense attorneys at Proetta & Oliver handle illegal weapons charges on behalf of clients throughout Hudson County NJ, including in Hoboken, Kearny, Jersey City, Union City, Bayonne, Secaucus, and Weehawken. Using our knowledge and skill, our lawyers can often navigate around the Graves Act by applying for a waiver of the Act’s mandatory provisions. Though it is not easy, we have had many successes applying for Graves Act waivers and getting them approved to help our clients avoid a long prison sentence. If possible, we seek to help our clients avoid a second degree crime presumption of a prison term.

Besides getting a waiver, we can also impress upon the prosecutor that your ignorance about the illegality of your weapon should factor into a plea offer. Perhaps you inherited the weapon or bought it from someone who boasted about the rifle’s or pistol’s capacity to rapid-fire large-capacity magazines. You might have thought a semi-automatic weapon would be an advantage while hunting wild boar, being unaware that the gun is illegal.

If the situation allows for it, we aggressively make your case for waiving the Graves Act provisions to obtain probation or dismissal via the Pre-Trial Intervention Program (PTI). Although probation is presumed to be off the table for second degree crimes, our team knows how to emphasize your status as a first-time offender, your mistake in having the illegal firearm, and other factors that may show that you do not belong in prison but in a diversionary program. No matter what the case may be, when you are facing charges for assault weapons, our criminal law firm is prepared to aid in your defense.

Speak to a qualified attorney well-versed in illegal assault weapons possession charges, The Graves Act, and the Pre-Trial Intervention program by contacting our office in Jersey City at (201) 793-8018 today. Free consultations are available at your convenience.