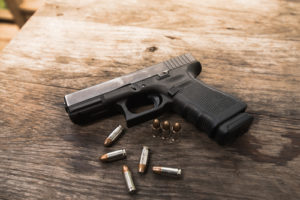 Our office recently defended a client who had been arrested for unlawful possession of a weapon under 2C:39-5B, which is a second degree crime and high capacity magazines under 2C:39-3, which is a fourth degree crime. Once arrested the defendant was brought straight to the Hudson County Jail and held pending his detention hearing. It was at this time that the family contact our office for help. We were immediately able to get the Prosecutor’s Office to withdraw their detention motion and the client was released and allowed to return home pending the outcome of the case. But before we get any further lets first discuss the particular facts of this case.

The whole thing started after State Police pulled over a Hummer on the New Jersey Turnpike ramp outside of Bayonne. They had seen the vehicle failing to maintain its lane of travel and initiated the stop probably suspecting to find a drunk driver. However, upon approaching the car they soon realized that our client had traveled from his home state of Virginia to make a delivery at a nearby restaurant and had gotten lost in the process. Normally they would have just let him go but the trooper also noticed an empty handgun holster on the underside of the dashboard below the steering wheel. After being questioned, our client admitted there was a firearm in the truck and the police had him step out slowly with his hands up. To make matters worse, the police quickly found the handgun stuffed in between the drivers seat and the center console with the handle sticking up. The gun they found turned out to be a massive handgun known as a “Desert Eagle” that was fully loaded with hollow points. Our client tried to explain to the police that he legally owned the gun had a concealed carry permit for the gun out of Virginia but unfortunately the police were not interested.

How We Did It

Now flash forward to the case in court. The unlawful possession of the weapon falls under the Graves Act in New Jersey which carries a mandatory period of parole ineligibility of 42 months (3 1/2 years) in state prison. That means, if convicted, you have to serve a mandatory 3 1/2 years before you can be considered for parole on an overall sentence that could range from 5 – 10 years. That being said, the prosecutor’s office was willing to take some of these mitigating facts into consideration (like that he is a legal gun owner) and presented us with an offer at pre-indictment court which would effectively waive the application of the Graves Act but they still wanted 3 years in state prison with 1 year parole ineligibility. We flatly turned down this offer because, in our opinion, this defendant should not face any jail time or even a conviction for what amounted to a lawful citizen making an unknowing mistake. Once the case was indicted, we appeared for arraignment and advised the judge we would be filing a formal motion and application for a Graves Act waiver seeking admission into Pre-Trial Intervention. Over the next several months our office worked hand in hand with the prosecutor’s office and the court in obtaining information based on our client’s background and legal gun ownership to convince the State that our client was the exception to the rule and that he should not only be granted a Grave Act waiver but that he should be thereafter placed into PTI so the case would be dismissed against him upon successful completion.

At the end of the day our client was not only able to (1) avoid incarceration and (2) not pay any fines but he also (3) avoided a criminal record so he (4) can still own firearms.