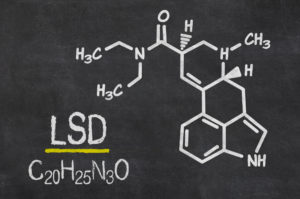 Approximately 10% of Americans report having tried LSD, also known as acid, at some point in their lives. LSD stands for lysergic acid diethylamide, a hallucinogenic drug that causes users to have an altered perception of their surroundings and reality. Having been recognized as having a high potential for abuse and no accepted medical use in treatment, LSD has been classified as a Schedule I controlled dangerous substance (CDS) in New Jersey. As a result, it is illegal to possess, share, or distribute LSD under any circumstances. Possessing or distributing LSD in New Jersey is a crime punishable with a prison sentence and significant fines. If you have been arrested and charged with possession or intent to distribute LSD, our experienced New Jersey drug defense attorneys are here to help. With a practice dedicated to defending clients charged with crimes, we have assisted thousands of clients in Hudson County and throughout New Jersey, including in Jersey City, Hoboken, Weehawken, Kearny, Union City, Secaucus, and beyond. To discuss your LSD charges with a member of our team, call (201) 793-8018 today or fill out our online form to arrange a free consultation.

LSD is clear or white and typically sold on blotter paper. There is no medical use for the drug and it can cause both short term and long term side effects. Immediate and short term side effects of LSD use may include panic attacks, extreme anxiety, lack of appetite, pupil dilation, nausea, high blood sugar, increased heart rate, tremors, hypothermia or hyperthermia, and numbness. The most notable long term side effect of LSD is the potential for flashbacks months or years after use, causing episodes of psychosis. These flashbacks are known as “hallucinogen persisting perception disorder” (HPPD). You can learn more about hallucinogens like LSD by accessing the following resource.

Under New Jersey law, it is a third degree indictable offense, in violation of N.J.S.A. 2C:35-10(a)(1), to possess any amount of LSD for personal use. If convicted of third degree possession of LSD, you may face up to 3 to 5 years in prison. Notably, this offense carries a presumption of non-incarceration. This means that if you are a first-time offender charged with possession of LSD (acid) in New Jersey, you may be able to have your charges dismissed by enrolling in and successfully completing the Pre-Trial Intervention Program (PTI). The New Jersey Drug Court Program is also another potential option for individuals facing LSD charges, regardless of their criminal history.

If the police have probable cause to believe that you distributed LSD or possessed LSD with intent to distribute it, you may be charged with a second or first degree indictable offense in violation of N.J.S.A. 2C:35-5. If you are charged with distribution of or possession with intent to distribute less than 100 mg of LSD, you may be convicted of a second degree drug crime, which carries a potential sentence of 5 to 10 years in prison with a presumption of incarceration. It is a first degree crime in New Jersey to distribute or intend to distribute more than 100 mg of LSD. There is a presumption of incarceration for this level of offense as well and, if convicted, you may be ordered to serve 10 to 20 years in prison.

As mentioned, you may face enhanced charges with more severe penalties for possession of LSD with intent to distribute, depending on the amount of LSD in your possession prior to your arrest. There are a number of ways that prosecutors can prove intent to distribute drugs, including witness testimony, evidence that you had a lot of cash on hand, that the volume of drugs in your possession is greater than would reasonably be for personal use, and evidence of packaging materials like blotting paper to prepare the drugs for sale. Like every other element of the crime, the prosecution must prove beyond a reasonable doubt that you had an intent to distribute the LSD if you were not arrested in the midst of a drug transaction.

If you have been charged with possession, intent to distribute, or distribution of LSD (acid) in New Jersey, you need an experienced criminal defense lawyer on your side. The attorneys at our firm have successfully handled countless cases involving drug charges throughout New Jersey and will work tirelessly to achieve the best result for you. Call our local Jersey City office now at (201) 793-8018 for a free review of your case and find out take the first step toward your best defense.