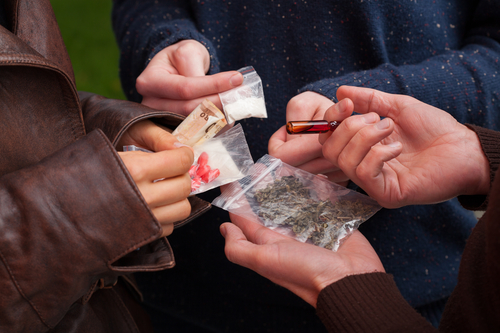 If you have been arrested for drug possession or selling drugs, such as distribution of marijuana, cocaine, or heroin in Hudson County, New Jersey, you are facing serious criminal penalties such as probation, community service, loss of drivers license, thousands in fines, and jail time. Most of all, a conviction of a drug offense will remain with you as a permanent criminal record that will limit your educational and employment opportunities for years to come. At Proetta & Oliver, we have extensive experience and insight that can only be gathered from years of defending clients charged with simple drug possession, possession of CDS with intent to distribute and other drug offenses. We will analyze the State’s against you and aggressively attack the weaknesses so the matter can be resolved in your favor.

In New Jersey, drug crimes exist on a spectrum, from mere possession to trafficking, with possession being the type of offense with lesser severity. Simple possession of any illegal drug — or possession of a prescription drug without a valid prescription — is an automatic criminal offense and can even be an indictable felony depending on the drug. To prove the crime of possession, the prosecution must convince a judge in municipal court or jury in superior court that the accused knowingly possessed an illicit substance, meaning they had knowledge of the substance being present, that it was a drug, and they had the ability to exert control over it. Possession and distribution in New Jersey are based on the same substances. Our Hudson County criminal defense firm represents clients who have been charged with municipal and superior court indictable drug offenses, including the following:

To prove distribution of illegal substances, the prosecution must convince a jury that the accused possessed a large quantity of certain illegal substances, or other evidence suggests an intent to sell the illegal drugs to others. But even a small amount of certain illegal drugs may support a drug distribution charge in some cases. So, having illegal drugs in your possession is enough for a distribution charge if the surrounding circumstances and amount indicate intent to sell. Ultimately, the penalties for a drug distribution offense are determined by the degree of the charge, which factors in both the type of drug and the quantity or amount of drugs involved. The bottom line is that anyone charged with a drug distribution crime in NJ needs to speak with a knowledgeable criminal defense lawyer about options and ways to best position yourself when substantial prison time and other repercussions are on the line. Our attorneys have experience defending clients charged with a myriad of drug crimes, such as:

How bad is a Drug Charge in New Jersey?

Make no mistake – a conviction for a drug charge will seriously affect your future and may make you ineligible for student loans, unable to achieve security clearance, and preclude you from many corporate jobs. Depending on the type and quantity of drugs involved, a drug possession charge may be handled as a municipal charge in a local court or an indictable charge in the Superior Court in Hudson. In addition, based on the drugs, amount, and circumstances, drug trafficking and distribution can result in convictions for third, second, or first degree crimes and prison sentences from 3 years to 20. Getting caught with large quantities of illegal drugs often results in a first degree charge that carries a twenty-year prison sentence. Some first degree crimes also come up with up to $500,000.00 in fines. Getting caught with less drugs could still result in a second degree charge and a possible ten-year prison term.

So, depending on the drugs found and the amount, the penalties can be high. For example, distributing five ounces or more of heroin or methamphetamine is a first degree crime, while possession of cocaine is a third degree crime. The penalties depend on the type of controlled substance and the amount of the drugs allegedly possessed or distributed. And penalties are steeper when weapons are involved with drug crimes, someone is injured, or the crimes took place near a school zone, or public property like a park, public library, or housing. Now, if the accused hired a minor in a drug distribution organization, potential penalties increase. The same is true for maintaining or operating a drug production facility.

In New Jersey, narcotics are divided into various drug schedules. Sections 24:21-1 through 24:21-56 of the New Jersey Statutes, known as the “New Jersey Controlled Dangerous Substances Act,” contains five schedules of drugs. Each schedule, from I through V, includes controlled dangerous substances (CDS) that must meet certain criteria. The New Jersey Drug Schedules are as follows:

Whether your charges end up in Superior Court or Municipal Court often depends on the type of narcotic according to the New Jersey Drug Schedule, the amount of drugs found, and whether there was intent to distribute the drugs. If you have been charged with a drug offense you most definitely need the experience of a seasoned defense lawyer to represent you through the judicial process. Our founding attorney, William A. Proetta, Esq., has handled over 1,000 criminal and municipal court cases throughout his legal career. As an experience drug defense lawyer, he can carefully evaluate the strengths and weaknesses of the cases against and provide an aggressive multi-option defense for avoiding these serious consequences. We are often able to get more serious indictable drug charges remanded to municipal court or negotiate our client’s admittance into Pre-trial Intervention in Superior Court so that you avoid a conviction altogether. If the municipal court has jurisdiction then we will work with the prosecutor to secure you a Conditional Discharge, similar to PTI, or seek to have your charges amended to a less serious charge or dismissed depending on the facts. We offer free consultations with a criminal attorney who can answer your questions and we are available 24/7 at (201) 793-8018 or e-mail us today.