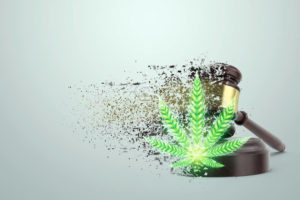 West New York is a small town with stunning views of the Hudson Waterfront. If you are driving from New York to New Jersey and happen upon this town, your visual intake of the River may be interrupted by the blaring sound of police sirens. Your happy moment can turn to panic along the New Jersey Turnpike if a law enforcement officer stops and arrests you for bringing marijuana into the State of New Jersey. You tell him that you have a prescription from New York but he refuses to listen and charges you with possession of marijuana under N.J.S.A. 2C:35-10(a). While you may feel terrible, you should take some comfort in knowing that you are not alone. We have represented countless individuals who have been charged with marijuana possession in West New York NJ, whether it’s in town along Bergenline Avenue, in their cars along the turnpike or routes 1&9, or near a public park or housing complex on Adams Street.

Having a prescription for marijuana in New Jersey or another state makes it legal to possess marijuana in New Jersey. If you have no valid prescription or are in possession of marijuana not obtained via a valid prescription, you will be arrested and charged with a criminal offense, as it remains illegal to possess the drug without one. There are consequences if found guilty of possessing any amount of marijuana unlawfully. Further, the penalties are different for possessing more than 50 grams of marijuana, as opposed to possessing less than 50 grams. The courts that will hear your case are different as well. If you find yourself facing marijuana charges for possessing less than 50 grams or an amount over that threshold, discuss your case with an experienced West New York marijuana attorney who knows the law and the arena in which you will be defending your case. At Proetta & Oliver, our lawyers have the knowledge and defense experience you want at your disposal when charged with a drug offense in the Hudson County area. Contact us at (201)-793-8018 for further information and a free consultation regarding your West New York marijuana charges.

Possession of less than 50 grams of Marijuana in West New York, NJ

Even if you only had a joint, you can still be charged with a disorderly persons offense for minor marijuana possession. Imagine that you just get off of work, you pay a dollar, hop on the jitney for a few blocks, and hop off along Bergenline. Feeling inspired, you light your blunt or joint and let the day fade away as you stroll down the street.  The only problem is that unbeknownst to you, an officer is nearby and sees you lighting up. Perhaps local police have had some experiences with you in the past, or maybe you have never had a problem with the law before. In either scenario, the officer is authorized to stop and arrest you for possessing marijuana.

Predictably, the joint is less than 50 grams and subsequently writes you a summons for N.J.S. A 2C:35-10(a)(4), possession of CDS in the form of marijuana, a disorderly persons offense.  The summons directs you to attend West New York Municipal Court where you can be sentenced to pay a $1,000 fine and $500 mandatory DEDR penalty, plus up to 6 months in the Hudson County Jail.

As if being arrested weren’t bad enough, if you possessed an amount of marijuana over 50 grams, you will be charged with a fourth degree indictable crime and now you are facing state prison. Criminal proceedings for Indictable crimes occur in Hudson County Superior Court in Jersey City. The potential sentence for a 4th degree marijuana offense includes the payment of $25,000 in fines, 18 months in New Jersey State Prison, a $750 DEDR penalty, license suspension, and the stigma of having a felony on your criminal record. The punishment is worse if you possess one ounce or more, are charged with marijuana distribution, or are caught on or near a school or public property.  We have all heard the saying,  “if you do the crime, you have to do the time” but who knew that the legislature would treat something so mundane so harshly?

Charged with Marijuana in West New York NJ, Have a Prescription from Another State

If you or someone you know has been charged with possessing marijuana in New Jersey due to a valid prescription in another state, we can seek dismissal of these charges. On the other hand, if you do not have a prescription, we will have to challenge the charges another way. Fortunately, our criminal defense attorneys have helped many people avoid the harsh realities of stiff sentences and we can help you too.  Call us for a free consultation today at (201)-793-8018. Our lawyers are available 24/7 to provide further information and counsel about your defense.

Feel free to read about other common criminal charges in West New York as well.