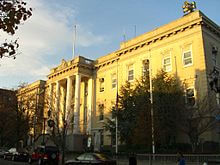 The law firm of Proetta & Oliver appears throughout Hudson County including West New York, New Jersey. If you have been arrested or charged in West New York with a crime such as assault, possession of marijuana, shoplifting, disorderly conduct or harassment you are facing severe penalties which include jail time, loss of driver’s license and potential deportation if you are not a U.S. citizen. Therefore, it essential that you hire an experienced criminal lawyer who will devote the necessary time and energy to properly defend your charges. Our firm puts clients first and that is why we make it our priority to not only provide a thorough and aggressive defense, but to also keep our clients fully informed throughout the entire judicial process. If you would like to discuss the details of your case further with a West New York criminal lawyer then contact our Jersey City office at (201) 793-8018 for a free consultation.

The West New York Municipal Court is located at 428 60th Street, West New York, NJ 07093. The West New York Municipal Court maintains regular office hours Monday, Wednesday, Thursday, and Friday from 9:00 a.m. – 4:30 p.m. and on Tuesday from 9:00 a.m. – 7 p.m. It is strongly recommended that you contact the municipal court administrator, Deisy L. Bello at (201) 295-5195 if you have any questions or requests for adjournment. The court can also be reached via facsimile at (201) 866-6974. Judge Amarillis A. Diaz presides over all municipal court cases in West New York such as disorderly persons offenses, traffic violations, and municipal ordinances including simple assault, DWI, harassment, and driving while suspended charges.

West New York is small in size but has a fairly busy municipal court because of the population density, surrounding urban communities, and the high volume of traffic that travels in around the town. West New York is a town in Hudson County, New Jersey, that is situated upon the New Jersey Palisades that is approximately one square mile in size and holds a population of about 50,000. If you would like more to learn more information on the community of West New York please visit the official website at http://www.westnewyorknj.org/

If you have been charged with a disorderly persons offense (misdemeanor) or serious motor vehicle offense such as DUI, driving while suspended, driving without insurance, or leaving the scene of an accident it is essential that you contact an experienced defense lawyer to represent you. The law firm’s founding attorney, William A. Proetta, Esq. has handled well over one thousand criminal, DWI, and traffic cases throughout his career. Let our Hudson County law firm put our experience and knowledge of the court system to work for you. Our office is conveniently located in Jersey City and our consultations are always free of charge so call us at (201) 793-8018.