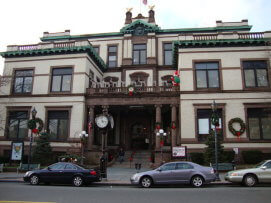 If you have been charged with an offense in Hoboken, you are not alone. Hoboken has become a popular residency for young affluent professionals freshly out of school and has a huge nightlife scene including bars, restaurants, and lounges. This creates a lot of alcohol related incidents especially around the holidays like St. Patty’s Day in particular. Sometimes, a mistake or misunderstanding leads to charges for a disorderly persons offense or petty disorderly persons offense, calling for your appearance in Hoboken Municipal Court. Worse yet, you may be accused of a felony offense requiring immediate attention in nearby Hudson County Superior Court. All convictions can result in a degree of lost freedom and other collateral consequences, with indictable crimes carrying the steepest sentences. Even traffic violations that presumably should not lead to serious penalties can end up costing you your license, your hard-earned money, your job, and more.

Defense Help You Need when Charged in Hoboken NJ

Proetta & Oliver is a Hudson County Law Firm that practices exclusively criminal, DWI, and traffic defense. Common charges that we defend in Hoboken include Disorderly Conduct, Simple Assault, Criminal Mischief, Weapons Possession, Burglary, Eluding Police, and Child Endangerment. We will work with you step by step through the entire process to ensure that you receive the best outcome allowable under the law. If you would like to discuss the details of your case with a Hoboken criminal defense attorney then contact our office in Hudson County at (201) 793-8018 for a free consultation.

The Hoboken Municipal Court is located at 100 Newark St., Hoboken, NJ 07030. Hoboken Municipal Court conducts business on the first floor of City Hall and is in session on Tuesday, Wednesday, and Thursday beginning at 9 a.m. Night court is also held once a week on Tuesday evening starting at 6 p.m. It is always good idea to arrive at court before 9 a.m. if possible and check in because it can get very busy. The court maintains normal business hours for the payment window (on the ground floor of City Hall) Monday thru Friday from 8 a.m. until 4 p.m. and extended hours on Tuesday until 9 p.m. If you have a request for an adjournment it is strongly recommended that you contact the court several days beforehand. The Hoboken Municipal Court telephone number is (201) 420-2120 and the court administrator is Kerri Azzoline. The court can also be reached by facsimile at (201) 420-2138. Chief Judge Cataldo F. Fazio and Judge Benjamin Choi hear all disorderly persons offense, motor vehicle tickets, and Hoboken city ordinances before the municipal court. For more information about the municipal court you can visit the official Hoboken Municipal Court website.

What Happens in Hoboken Municipal Court

If you have been arrested, been issued a summons, or received a traffic ticket, your case will most likely be heard in the municipal court located in the city or town where the offense allegedly occurred. This applies to Hoboken as well as other municipalities throughout New Jersey. Municipal courts like the one in Hoboken have responsibility for the following types of cases: low-level criminal matters, motor vehicle and parking tickets, municipal ordinances, and fish and game violations. The types of criminal charges handled in Hoboken’s local court typically involve lesser offenses like disorderly conduct, simple assault, shoplifting, and misdemeanor drug possession. In fact, these offenses are not technically classified as “crimes.” Instead, they are called “disorderly persons offenses” or “petty disorderly persons offenses.” When a person is charged with one of these less serious offenses, their case is filed in the local municipal court. Assuming the local municipal prosecutor wants to proceed with the case against you, and you cannot resolve the case another way, your case could be scheduled for trial.

Indictable Crimes are Handled in the Higher Court

Not all cases that lead to arrests and charges in Hoboken are heard and decided in the Hoboken Municipal Court. For example, felony offenses referred to as indictable crimes of the first, second, third, and fourth degree will be sent to the Hudson County Prosecutor’s Office and ultimately prosecution occurs in the Hudson County Superior Court. Indictable crimes come in degrees, with first degree crimes being the most severe and fourth degree the least. Examples of first degree crimes are murder, aggravated sexual assault, kidnapping, manslaughter, maintaining a drug manufacturing premises, or large quantity drug distribution. One step below first degree crimes, second degree crimes include burglary with a weapon, some drug crimes, robbery, some aggravated assault charges, shoplifting merchandise valued over $75,000.00, and unlawful possession of a firearm, among others. Some crimes may be reduced to second degree crimes from first degree crimes, like kidnapping, if the victim is released unharmed.

Third and fourth degree crimes do not come with the presumption of prison sentences. Possession of a controlled dangerous substance, DUI convictions with multiple priors, theft by deception when the amount falls within a $500 to $75,000 range, shoplifting items valued under $75,000 but over $500, terroristic threats, and aggravated criminal sexual contact are examples of third degree crimes. You can learn more about Hoboken Third Degree Crimes via the link provided. Furthermore, committing forgery, some resisting arrest charges, and lewdness can lead to charges for a crime of the fourth degree being filed against you.

In all of these cases, it is extraordinarily important to have an effective defense mapped out in advance, which a qualified Hoboken criminal attorney can painstakingly prepare and carry out on your behalf. Avoiding prison, a felony conviction on your criminal history, and the many detrimental effects of being found guilty could be on the table in your case with the right negotiating stance, defense arguments, or diversionary program acceptance. Find out more about the legal avenues that may be available to you by discussing the individual facts of your case with a lawyer at Proetta & Oliver today.

Hoboken is a city in Hudson County, New Jersey that is about 1.2 square miles in size and has a population of about 50,000 because of this sometimes referred to as “the mile square city”. Hoboken is part of the New York metropolitan area and contains Hoboken Terminal, a major transportation hub for the region, which makes it ideal for young professionals who work in New York City. In fact, Hoboken has the highest public transportation use of any city in the United States. Hoboken Municipal Court is often busy with all the surrounding urban areas and mass highways, such as the Lincoln Tunnel which is just north and the Holland Tunnel to the south. If you would like learn more information about the City you can visit the official Hoboken website.

If you have been charged with a disorderly persons offense (misdemeanor) or serious motor vehicle such as DWI, Driving While Suspended, Leaving the Scene of an Accident, or Driving Uninsured you are facing severe punishments which include loss of your driving privileges, community service, probation and even county jail. Things get worse when the charges are indictable in nature, with the consequences on the line potentially life-altering for years and some even permanent. Therefore, it is important that you hire an experienced defense attorney lawyer who navigate the court system and successfully resolve your case. The firm’s founding attorney, William A. Proetta, Esq. has handled innumerable criminal and motor vehicle cases during his long career practicing criminal defense. Our office is conveniently located in Jersey City and we offer an initial consultation for free so give us a call today at (201) 793-8018 if you would like to learn more about how we can help you.

More information that may apply to your particular case: