What Happens Before an Indictment in New Jersey? 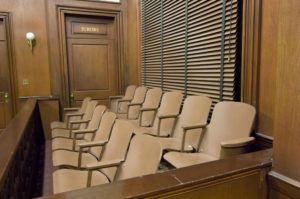 New Jersey uses what is known as a grand jury process to bring its more serious criminal charges against accused individuals. The federal and state constitutions actually guarantee the right to a grand jury in certain situations. The grand jury process is designed to ensure that an impartial group of your fellow citizens reviews evidence against you and determines that it is sufficient before serious and potentially life-altering criminal charges can be filed against you by the government. Grand juries differ from criminal trial juries in that they are composed of 23 people. Nevertheless, they are similar to trial juries in that the grand jurors selected to serve are summoned at random from driver’s license databases, tax rolls, and voter registration records, with the goal of ensuring a fair and impartial panel. Once 23 people have been summoned and seated as a grand jury, they hear evidence presented by the state regarding the crime for which you have been investigated. The grand jury determines if enough evidence has been presented to indict you for that crime.

If you have been arrested and charged with an indictable crime such as robbery, aggravated assault, burglary, theft, unlawful possession of a weapon, cocaine distribution, or prescription fraud in Hudson County, NJ, here is what happens prior to the critical decision on whether or not to indict. At Proetta & Oliver, we are a team of highly experienced criminal defense lawyers who assist clients with all aspects of criminal cases and can walk you through every step of the criminal case procedure in New Jersey. Our attorneys handle all aspects of your case, from investigation, to indictment, plea negotiations, and trial. Call (201) 793-8018 today to learn more. A lawyer who can help is available now for a free consultation.

A law enforcement agency must first investigate your allegedly criminal actions before any evidence goes before a grand jury. In serious cases, police may rely on wiretaps, jailhouse informants, forensic evidence drawn from a crime scene, bank and other business records, and witness interviews to marshal evidence against you. Law enforcement will then present this evidence to the appropriate prosecutor’s office in New Jersey. Prosecutors in either Superior Court in the county where the charges were issued or, in the U.S Attorney’s Office in the case of federal crimes, are tasked with presenting the evidence to a grand jury with the goal of securing an indictment against you.

You may not be aware that you are being investigated, wiretapped, under surveillance, or even followed by police at this stage. Or you may be arrested on the spot after a run-in with police. At some point, police may contact you and ask you to come in for questioning, in which case you should contact an attorney right away. While the criminal justice process is designed to require warrants signed off on by a neutral judge to protect your rights during an investigation, it is vital that an attorney review all the records related to police conduct before, during, and after your arrest to ensure that none of your rights were violated.

Once a prosecutor’s office has received investigatory reports from the law enforcement agency compiling evidence against you, they must determine whether the evidence is enough to support an indictment. They will read the reports and potentially even reexamine witnesses at this stage of the criminal case. If you are arrested and charged with an indictable offense such as heroin distribution, endangering the welfare of a child, eluding police, or another felony, you have then formally entered the criminal process and need to understand the next steps.

After a bail determination has been made and potentially a pre-trial detention hearing if the prosecutor is seeking to have you kept in jail for the duration of your case, you will have a pre-indictment conference. You are entitled to have an attorney advise you before and during your pre-indictment conference. The goal of the conference is generally to resolve the case before evidence is presented to a grand jury. The prosecutor will consult with you and your attorney, generally discuss the case against you, and offer you a plea bargain. They are required to provide you with limited discovery, meaning some, but not all, of the evidence against you at this stage as well.

If you do not have a prio criminal record, you may also able to enroll in Pretrial Intervention, a type of diversion program in which you serve a probationary period under court supervision, after which the charges are dismissed. In addition, if the prosecutor reviews the evidence against you and determines that there is insufficient evidence to move forward, your charges may be dismissed. The prosecutor may also agree to downgrade the charges to a lesser offense in some cases. If your charges are reduced from an indictable offense to a disorderly persons offense, your case will be remanded to the municipal court and the penalties you face are significantly less.

Presentation of Evidence to the Grand Jury and Decision to Indict

You are generally not allowed to be present during grand jury proceedings. Your attorney is not allowed to be present either. However, you still have some rights at this stage. One of your rights requires that prosecutors present certain types of exculpatory evidence, or evidence that points to your innocence, to the grand jury. The grand jury must be able to review evidence in your favor, along with all the evidence that points to your guilt, before making an indictment decision. If the grand jury weighs all of this evidence and determines that there is enough to go forward, they will issue an indictment charging you with a crime. Your case will then proceed through Superior Court. If the case is not resolved through negotiation, motions to suppress evidence or others used for your defense, you do not take a plea deal, and the case is not dismissed, your case will then head to trial.

Facing an Indictment in Jersey City NJ? Contact Us Now

If you are facing charges for sexual assault, lewdness, resisting arrest, or another crime, contact our skilled criminal defense lawyers in Jersey City now at (201) 793-8018.  You need to fully understand the charges against you and all of your options before talking to police or heading to court. The consultation is absolutely free and if you enlist our help, we will fight for your rights throughout the legal process and vigorously defend your innocence.