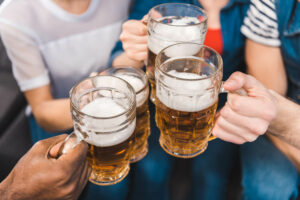 Alcohol is as popular as ever in New Jersey, with more and more people drinking socially during “happy hours,” at night, and on weekends. But one beer from the fridge, or one glass of wine at the bar or restaurant, can quickly turn into several drinks, and soon the drinker may be cognitively impaired. This impairment can take many forms, but it often involves the individual losing their ability to evaluate situations and make sound decisions. Even a few beers can cause a person to become more outgoing than usual, and in some cases the person may become unnecessarily aggressive and even violent toward others. Too much alcohol, and the person could wind up making poor choices, such as getting behind the wheel of a car at the precise moment when their senses are dulled and their reaction time is diminished. These are just a few of the reasons why so many arrests and criminal charges in NJ stem from alcohol. If you were arrested while intoxicated or are facing criminal or motor vehicle charges that arose while drinking, it is paramount that you speak with an experienced criminal defense lawyer regarding your case and what can be done to defend you.

At Proetta & Oliver, our attorneys have decades of combined experience defending clients charged with disorderly conduct, resisting arrest, assault, DWI, underage alcohol possession, domestic violence crimes, and many others involving the use of alcohol throughout Hudson County. Contact our office in Jersey City if you would like a free initial consultation anytime, 24/7. Simply send us a message or call (201)-793-8018 to get in touch with a member of our legal team.

Effects of Alcohol on Behavior and Decision-Making

When it comes to the effects of alcohol on a person’s behavior, it is important to first understand how alcohol can eliminate a person’s inhibitions and make them more prone to violent behavior. Generally speaking, if you drink too much alcohol, you could find yourself struggling to think clearly. More specifically, alcohol has a direct effect on the brain and on the user’s control over their own body by dulling the senses and making it harder to walk, communicate, or react quickly. This is why a drunk person may slur their speech, see double, and fall down or pass out. Alcohol also sends higher concentrations of dopamine and norepinephrine to the brain after entering the bloodstream, which is why a person who drinks alcohol tends to feel pleasure more intensely and to become more excitable. Additionally, alcohol can affect the prefrontal cortex, which is the part of the brain that allows the user to control their actions and regulate their emotions. Drinking excessive amounts of alcohol can have a profound impact on your ability to think rationally and to contemplate the consequences of your actions.

Alcohol can affect you chemically and impair your judgment. Once you lose control over your impulses and your behavior generally due to drinking too much alcohol, you are more likely to make a mistake that could have catastrophic consequences. In the worst-case scenario, this may lead to you committing a crime or traffic offense. Some of the most common charges that involve alcohol include the following.

One of the biggest problems with drinking alcohol is that you are less likely to recognize that you’re too drunk to drive. Driving While Intoxicated (DWI) is technically a traffic violation, but it still often carries severe penalties such as driver’s license suspension and jail time. Moreover, if you are involved in a DWI accident that causes property damage or that injures or kills another person, you could face criminal charges with the possibility of significant prison time.

While most crimes involving alcohol require the offender to actually do something after drinking, that is not the case for underage drinking charges. That’s because it is always against the law for a juvenile to purchase or consume alcohol in New Jersey, which has a zero-tolerance policy on alcohol consumption by minors. A person convicted of underage drinking is subject to monetary fines, as well as suspension of their driving privileges if they were found possessing alcohol in a car.

Drunk driving is a particular problem for minors who already lack the necessary life experience to fully understand just how bad the consequences can be for certain ill-advised actions. Although it’s illegal for a minor to drink alcohol in NJ, kids still find a way to get access to alcohol. When a minor has too much alcohol and then attempts to operate a motor vehicle while intoxicated, things can quickly go from bad to worse because they can be cited for an underage DWI. Additionally, it isn’t even necessary for a juvenile to be drunk in order to be charged with an underage DUI because any alcohol in a minor’s system will put them above the legal limit of .01% blood alcohol concentration (BAC). A conviction on underage DUI charges could result in the minor’s license being suspended, as well as substantial fines, mandatory alcohol education classes, and community service.

Statistics show that alcohol plays a role in almost 50% of violent crimes. A few drinks can cause a person to become more aggressive and confrontational, particularly when other people around them have also been drinking. When that increased aggression merely results in threats or a minor physical altercation, the offender could be charged with a disorderly persons offense for simple assault. When there is a more serious fight that causes significant physical injuries to the victim, however, the offender can be arrested and charged with a felony for aggravated assault. The penalties for an aggravated assault conviction may carry a presumption of incarceration, depending on the facts of the case and the degree of the charges.

Alcohol plays a prominent role in many violent encounters between spouses, significant others, and intimate partners. Whether the encounter turns physical with an assault, sexual with a sexual assault or other sex crime, or psychological and emotional with threatening words, the offender can be arrested and charged with a crime. In addition to facing criminal charges, you will also probably be subject to a restraining order. Moreover, since domestic violence is taken very seriously by law enforcement, it is likely that you will be arrested, have your firearms seized, be removed from a residence you share with the alleged victim, and possibly be held in detention while awaiting trial.

Disorderly conduct is a kind of all-purpose charge that police often bring against someone when no other charge can be filed. That’s because the disorderly conduct statute broadly applies to anyone who fights, threatens, or otherwise engages in dangerous behavior in public with the purpose to annoy, alarm, or cause inconvenience. While most disorderly conduct arrests stem from physical altercations, even a verbal dispute can result in charges for disorderly conduct because the law specifically prohibits the use of offensive language in a public place. Needless to say, all of these types of behavior are more likely when a person has consumed alcohol.

Another criminal charge that can apply in a lot of situations is resisting arrest. It is not uncommon for a person to be drinking at a bar on the weekend and get into some sort of skirmish or altercation that ends with the cops being called. If this happens to you, and you struggle or otherwise resist when the police attempt to subdue you, there is a good chance that you will be charged with resisting arrest. This is because you are required by law to comply with every request made by law enforcement. Moreover, a charge for resisting arrest would be in addition to any other criminal charges you might face for the original drunken incident.

Need an Attorney for Arrest while Drinking Alcohol in Jersey City, NJ

When you’re drunk, you are less likely to make sound decisions, and this can have disastrous consequences – particularly if you make a bad decision that ends with you being placed under arrest and charged with a crime. But the good news is that, in the cold light of day, you are more than capable of evaluating your options and choosing the right path forward. The best decision you can make right now is to speak with an experienced criminal lawyer who is prepared to defend you in a criminal or traffic case that involves drinking alcohol.

Whether you’ve been charged with a DWI for driving while intoxicated, or you face criminal charges for assault after drinking one too many at the bar, a knowledgeable criminal defense attorney can help you contest the charges and avoid the worst possible outcomes. This may involve challenging the evidence by filing pre-trial motions, negotiating a favorable plea deal with the prosecutor, or persuasively arguing the case in front of a judge or jury at trial. All of these strategies are likely to be more successful with the assistance of skilled legal counsel.

If you do anything after being arrested and charged while you were drinking alcohol, contact the criminal defense lawyers at Proetta & Oliver. We defend cases arising in places like Hoboken, Jersey City, Kearny, Union City, Bayonne, Secaucus, Guttenberg, and other Hudson County towns. For a free consultation with a legal counselor who can address your particular concerns, contact our office in Jersey City at (201)-793-8018 today.