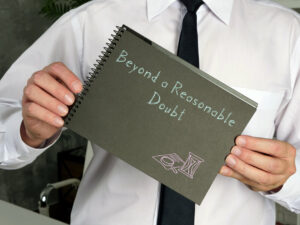 Around holidays and on weekends, officers are busy policing drunk drivers when the number of DWI and DUI offenses increases. When they arrest and charge someone with driving under the influence in New Jersey, the state is required to prove its case beyond a reasonable doubt in order to convict the defendant of the DWI charges.

What is Beyond a Reasonable Doubt in a DWI Case in New Jersey?

To convict a defendant of a DWI, a prosecutor must prove two elements: the driver was operating a vehicle, and they had an illegal blood alcohol level or were impaired by intoxicating substances or an illegal drug in their system. The proof must convince a judge that the driver drove under the influence of drugs or alcohol beyond a reasonable doubt. The Due Process Clause of the federal and state constitutions mandates the state’s beyond a reasonable doubt burden of proof as to each element of a crime (In re Winship, 397 U.S. 358, 364 (1970). That means the evidence to convict someone must be convincing to a high degree. The burden of proof, beyond a reasonable doubt, is the standard for criminal cases, and a DWI/DUI is quasi-criminal in New Jersey and thus, subject to the same standard.

The problem, however, is that the constitution or any other authoritative writing does not define the proof standard (Victor v. Nebraska, 511 U.S. 1,5 (1994). Thus, it is a subjective standard to a judge or jury that the New Jersey Supreme Court cautions trial courts against defining in jury instructions (State v. Biegenwald, 106 N.J. 13, 41 (1987). In a DWI case, the judge decides guilt or innocence. It stands to reason that each judge may have a slightly different sense of what is “reasonable doubt.” However, in criminal trials, the Model Criminal jury charges inform the jury’s instructions, which help jurors understand the law and “reasonable doubt.” They may be presented with the language “firmly convinced” of a defendant’s guilt, though not necessarily to the degree of absolute certainty. Some cases, like restraining order trials, hinge on a different standard called a preponderance of the evidence (more likely than not), but less than total certainty.

How do Prosecutors Prove DUI Beyond a Reasonable Doubt?

The investigation and evidence-gathering stage is the beginning of a DWI prosecution. Typically, an officer pulls a driver over for driving erratically or another traffic violation, like rolling through a stop sign. Once the officer approaches the driver and asks for identification, the investigation begins. The officer looks for signs on the driver’s face, on their breath, in their eyes, and in their bodily movements for impairment. If they believe a driver is intoxicated, they seek confirmation of their suspicion through a series of field sobriety tests, followed by a breathalyzer, or in limited circumstances, bodily fluid tests, such as blood samples or urine, depending on the circumstances. If they suspect a driver is high, they may seek confirmation with a blood test, urinalysis, and possibly an evaluation by a Drug Recognition Expert. All of the evidence gathered in the course of the investigation, if obtained lawfully, may be used to establish a DWI defendant’s guilt beyond a reasonable doubt.

What can get You Convicted of Driving under the Influence Beyond a Reasonable Doubt?

Using their presumed objectivity and knowledge of the law when it comes to understanding and clarifying the proof standard, a judge may find highly convincing evidence of a DWI. They may find that a breathalyzer reading of .10% (The legal limit is below .08%.) blood alcohol concentration (BAC), the officer’s testimony about the stop, arrest, breathalyzer test, and defendant’s behavior all undoubtedly point to the defendant driving while intoxicated. Perhaps with all of this evidence, there is little to no question that a DWI occurred, and the defendant is guilty. However, when the case involves a drunk driver sleeping in their car with the keys in their pocket, the judge may question whether the driver operated a vehicle while drunk or high. Though the driver could have awakened, sat behind the wheel, and driven off, which possibly may be enough to prove operation of a vehicle, the driver’s intent to do so may raise doubt in a judge’s mind.

How do You Establish Reasonable Doubt when Defending DWI Charges?

When a judge has any legitimate doubt whether the driver was operating a motor vehicle at the time of the arrest or the accuracy of the breathalyzer reading, they cannot convict the defendant of a DWI or DUI. So, while the prosecutor must prove the charges against the defendant beyond a reasonable doubt, the defendant must raise doubts to avoid conviction. There are many ways to raise doubts about the evidence or proof in a DWI case. For example, the defendant can raise questions about the accuracy of the breathalyzer or the results of the field sobriety tests. The police must conduct both tests under strict conditions following standard procedures applicable to each. For instance, an officer administering a field sobriety test must ask the defendant if they are on any medications that would interfere with taking the test. Otherwise, the defendant could raise the issue at trial, casting doubt on the field test results. Likewise, if a driver could not balance on one or more of the tests, the reason may be due more to medications they took than to alcohol.

An ordinary person untrained in the legal operation of breathalyzers or conducting field sobriety tests may not have the knowledge and understanding necessary to raise those doubts. Therefore, it is best to hire a diligent, highly credentialed DWI defense attorney who knows all the avenues of raising doubt, from questioning the accuracy of the machinery, procedures and arrest, to witness statements and motives or errors of the officers. The DWI lawyer’s job is to cause a judge to be unsure that a defendant was drunk, high, or driving at all. Alternatively, they can challenge the evidence as illegal for use in the DUI trial. Police who stop drivers must have a reasonable suspicion of unlawful activity or probable cause to pull someone over and detain them. Any evidence the police gather from an unlawful stop may be excluded and disregarded without this. At that point, a judge cannot consider it in determining guilt or innocence.

And the police are not the only ones who make mistakes or act unlawfully. A prosecutor who does not provide discovery to the defendant and their attorney may jeopardize their case. The prosecution owes the defense all documentary and other evidence against the defendant. If they do not provide it even after a court orders them to, a judge may dismiss the case. In addition, evidence that the police forced a defendant to take a blood test renders those blood test results inadmissible, meaning the prosecutor cannot use it to prove a DWI. It is illegal to force a suspect to take a blood test without their consent or a warrant.

There are numerous ways to cast doubt on the police, the prosecutor, and the evidence to defeat a DWI case. Be sure to have an experienced DWI lawyer helping you defend yourself. The team at Proetta & Oliver has racked up a lengthly list of DWI dismissals and outstanding results for clients facing DUI charges in towns throughout Hudson County and New Jersey, such as Hoboken, Jersey City, North Bergen, Secaucus, Bayonne, Weehawken, Union City, Guttenberg, and Kearny. If you have questions or concerns about a DWI charge that has been filed against you, contact our law office in Jersey City for a free confidential consultation. Phones are answered 24/7 by calling (201) 793-8018 and you can also contact us online to speak to an attorney about challenging your DUI case.