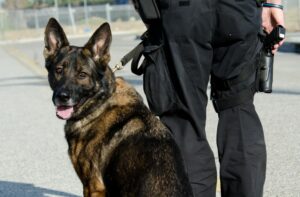 Fatal drug overdoses caused by the opioid epidemic, the rising threat of terrorist activity, and a seemingly never-ending number of mass shootings have led law enforcement in New Jersey and across the country to place an increased emphasis on early investigations that can stop the worst crimes before they happen. One of the strategic tools used by police is the K-9 unit, which gives authorities an enhanced ability to detect drugs, explosive devices, and other weapons. This has had a positive effect on crime fighting generally as law enforcement is able to make early arrests. Unfortunately, the use of drug-sniffing dogs has also had a deleterious effect on the constitutional rights of suspects because police often exceed their statutory authority while conducting searches for narcotics, bombs, and guns. What could this mean for someone who has been arrested and charged with a crime in New Jersey after a police search that utilized a K-9 unit? To learn more about the police dogs’ role and its impact on your criminal case, keep reading.

If you are facing drug charges, weapons charges, a combination of the two with a weapons and controlled dangerous substances offense, or another criminal charge in New Jersey, Proetta & Oliver has the defense team you want fighting for you. We utilize decades of combined experience to successfully handle criminal charges arising after dog searches at traffic stops and other places throughout Hudson County, including in towns such as Bayonne, Hoboken, Jersey City, Union City, Weehawken, Secaucus, and Guttenberg. To talk through the details of your criminal investigation and resulting charges, as well as your defense options, contact us 24/7 for a free consultation. Our Jersey City office can be reached at (201) 793-8018 to consult with an attorney at our firm right away.

The K-9 Unit and Your New Jersey Criminal Case

K-9 units are typically maintained by the sheriff’s offices in each county in New Jersey. Most K-9 units provide important law enforcement services to local police departments throughout the state, as well as to federal agencies (e.g., the Drug Enforcement Agency, Federal Bureau of Investigation, and U.S. Postal Service) when necessary for multi-state law enforcement operations. Canines in these units receive special training for particular skills that are needed to perform the required tasks.

The dogs in these units are available to assist local police officers with both daily patrols and emergency response services, which may involve apprehension of suspects, detection of drugs or tobacco, searches for evidence, and recovery of cadavers in homicide investigations. When the K-9 unit is in a county that houses inmates at a correctional facility, canines may be used to detect contraband before it is brought into the jail system. Most frequently, the dogs in K-9 units are deployed for specialized investigations of illegal drug cases and bomb threats because the dogs have an acute sense of smell that allows them to detect narcotics and explosives without any visual cues.

When the K-9 unit is called to investigate, it usually occurs during searches of homes, office buildings, schools, cars, train stations, airports, ports, and other main transportation hubs. Whether it’s a report of a bomb threat at a post office or a drug investigation conducted by detectives at a residence, the canines are usually capable of detecting the faintest of odors. Once the evidence is found by police, the end result is often the suspect being placed under arrest and charged with a criminal offense.

Criminal Charges based on Police Dog Searches in NJ

The precise charges that an individual might face after being arrested in connection with a K-9 unit investigation can vary, depending on the facts of the case and the type of evidence recovered by law enforcement. The two most common charges in these cases are for (1) drug offenses and (2) weapons offenses.

Charged with Drug Crimes after a Drug Sniffing Dog Search

Drug-sniffing dogs are utilized by New Jersey K-9 units to detect the presence of illegal narcotics. When an individual is found in possession of a controlled dangerous substance (CDS), they are often arrested and charged with a felony drug offense. The exact charges that may be filed depend on a number of factors, including the type of CDS and, many times, the weight or quantity of the drug. For example, a person found with any amount of cocaine, heroin, or many other drugs can be charged with a third degree indictable offense, which can result in a prison sentence of 3-5 years and a fine of up to $15,000.

If the offender had a large quantity of a controlled substance, however, the charges can be elevated to possession with intent to distribute, which comes with even harsher penalties. The same is true for possession of a prescription drug without a valid prescription. Depending on the number of pills found by the K-9 unit, the suspect could be charged with a serious drug offense that carries severe penalties, including prison time, monetary fines, and driver’s license suspension.

Another common charge in cases involving K-9 units is for unlawful possession of a prohibited weapon or device. Generally speaking, most weapons charges brought under the applicable statute, N.J.S.A. 2C:39-3, are for illegal possession of prohibited weapons such as sawed-off shotguns, firearm silencers, defaced firearms, and armor-piercing bullets. A lot of weapons charges stemming from K-9 investigations, however, are for unlawful possession of a destructive device under subsection (a) of the criminal statute, particularly when the canines were called in to investigate a bomb threat. Possession of these types of explosive devices is almost always a violation of the law, unless in certain circumstances when the individual is an active member of the military or an on-duty police officer. As a result, most suspects should expect to be arrested and charged with a felony weapons offense if the K-9 unit discovers them in possession of a bomb, dynamite, or any other explosive device.

Unlawful possession of a destructive device is classified as a third degree indictable offense. The penalties for anyone convicted of this offense, or for anyone who pleads guilty to it, include a sentence of 3-5 years in state prison and a fine of up to $15,000.

The law in criminal cases involving evidence uncovered by K-9 units is complicated. This is because there are certain constitutional protections afforded by the Fourth Amendment that are supposed to shield individuals from illegal searches and seizures by law enforcement. The main question when a canine unit is involved is: was the search conducted by police a lawful search, or does it raise constitutional issues? This can provide a defendant in a drug or weapons case with a possible defense option because any evidence that was discovered by authorities through an illegal search and seizure is considered “fruit of the poisonous tree” and may be declared inadmissible at trial. The outcome of these cases often hinges on whether police had a warrant to conduct the search, or whether they had reasonable suspicion to justify a warrantless search of the suspect and/or their property.

Courts have previously ruled, and therefore established precedent, that a K-9 unit dog smelling a person does, in fact, constitute a search of that person because an inspection by a drug-sniffing dog is functionally similar to a physical inspection by a police officer. For instance, one court said that a drug-sniffing dog scrutinizing an individual was a substantial intrusion on the individual’s privacy rights. Importantly, other courts have found that a K-9 unit search of a person’s property – but not the actual person – might not constitute a search and seizure for the purposes of a Fourth Amendment argument. The key factor, according to these courts, is whether the dog’s inspection is intrusive enough to affect the person to whom the property belongs. The constitutional issue is even more complicated in motor vehicle searches. Some courts have ruled that a quick search of the exterior of a car by a canine is not an illegal search and seizure, while other courts have ruled that a vehicle search by a drug-sniffing dog that goes on for too long may be a Fourth Amendment violation.

Since this area of the law is largely unsettled and often disputable based on the facts of the case, it is imperative that if you have been arrested in connection with search by a K-9 unit, you speak with an experienced criminal defense attorney immediately. You may have viable options to beat the case, get key evidence suppressed, and ultimately have the charges dismissed. Call (201) 793-8018 for a free initial consultation with one of the talented criminal defense lawyers at our Hudson County defense firm.