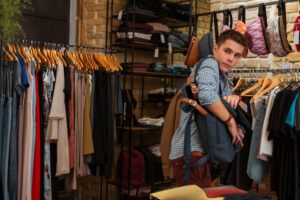 It’s generally understood that teenagers are more likely to make mistakes than adults. Whether it’s a pre-teen who just doesn’t know any better, or an older kid caving to peer pressure, just about every parent knows that feeling of finding out that their child has done something that they simply shouldn’t have done. When the mistake involves juvenile shoplifting, the damage to the child’s future can be severe. The laws governing juvenile shoplifting offenses in New Jersey are often harsh and unforgiving, especially when the court wants to send a message. Given the detrimental nature of the penalties that may be imposed in your son or daughter’s shoplifting case, your best move right now is to speak with an experienced juvenile defense lawyer who is prepared to fight for your child and work toward getting the case dismissed, avoiding the majority of the consequences, or securing an alternative outcome that allows them to move on unscathed by a juvenile record.

Shoplifting charges are extremely common in New Jersey, and this is especially true for minors caught shoplifting. Both adults and juveniles can be charged with shoplifting under N.J.S.A. 2C:20-11 of the NJ Criminal Code. As set forth by the criminal statute, there are a number of ways that a minor can commit a shoplifting offense, including the following:

Juvenile charges are handled in Juvenile Court, which follows a unique process that stands apart from the process for criminal charges involving adults. A child who is under the age of 18 and charged with shoplifting will have their case adjudicated in the Family Division of the Superior Court located in the county where they reside. This means that even if the child allegedly committed the shoplifting offense in a different county from the one they live in, they will be required to appear in court in the county where they live. In other words, if your child is accused of shoplifting and they live with you in Jersey City, the case will be adjudicated in Hudson County Superior Court.

If and when the case does go to trial, it will be decided by a judge in a bench trial. This is different from an adult criminal matter handled in Superior Court, which gives the adult defendant the right to have their case heard by a jury. Additionally, the standard used by the judge when determining the appropriate sentence in a juvenile shoplifting case is “the best interests of the child,” whereas the emphasis in a typical criminal case sentencing is usually the best interests of society.

What is the Penalty for a Juvenile Shoplifting Offense – 2C:20-11

The most extreme penalty in just about any criminal case is incarceration. While adults face the very real possibility of jail or prison time if they are convicted of shoplifting, minors may be subject to juvenile detention for a shoplifting conviction or guilty plea. Both the degree of the charge and the sentencing range that can be imposed by the judge will typically depend on the value of the merchandise that was stolen. The categorization is as follows in terms of the retail value of the theft:

In addition to being sentenced to time in a juvenile detention facility, a minor who is convicted of a shoplifting offense in NJ may be subject to additional penalties, such as fines and civil penalties, such as paying restitution to the store owner for the stolen merchandise. It’s also possible that the owner of the retail store could file a civil lawsuit, particularly if the shoplifting offense caused damage to the store. Beyond that, one of the long-term consequences of a juvenile shoplifting conviction is that the minor will be left with a juvenile record. This can cause serious problems for the child later in life and prove incredibly problematic if they find themselves charged with another juvenile offense or crime in the future.

Can an Attorney get Your Child out of a Shoplifting Charge in New Jersey?

The NJ juvenile justice system tends to emphasize rehabilitation over punishment and incarceration, especially because young offenders still have their whole lives ahead of them. This may provide the criminal defense attorney handling a juvenile shoplifting case with an opportunity to persuade the prosecutor and/or the judge to allow for an alternative sentence. For example, if it can be shown that the juvenile defendant would benefit from a less strict punishment without a juvenile detention component – such as community service, mental health counseling, or probation. The judge could also allow for a Deferred Disposition. This means that the defendant would be able to avoid detention, and instead would need to stay out of trouble for a certain period of time. As long as the juvenile meets the requirements of the deferred disposition program, primarily by not committing another offense, the juvenile shoplifting charges will eventually be dismissed. Not only does the minor avoid detention, but they also avoid having a juvenile record that includes the shoplifting incident. Most juvenile offenders charged with shoplifting are able to qualify for deferred disposition. Acceptance into the program is not automatic, however, so it is imperative that a qualified attorney handle the case and argue on behalf of the juvenile in court.

If your child has been accused of shoplifting in Hudson County or elsewhere in New Jersey, we invite you to contact our office in Jersey City at (201) 793-8018 to speak with an attorney in a free consultation. You can also send us a message or email us if you or a loved one has a juvenile shoplifting case and needs legal counsel. Our team is happy to answer all of your questions and phones are answered 24/7 to best serve your needs.