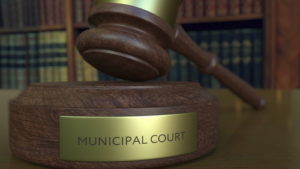 Have a Case in Municipal Court in Hudson County?

Among New Jersey Criminal Courts, Municipal Courts are the most common courts that citizens will ever appear before, either as a witness, a victim, or a defendant. Municipal courts handle a high volume of the most common types of cases in New Jersey, including parking and traffic tickets, disorderly persons offenses and municipal ordinance violations, and other comparatively minor criminal or quasi-criminal offenses (as compared to indictable offenses, which are similar to felonies in states outside New Jersey). If you have an upcoming case in municipal court, it is important to understand how municipal courts in New Jersey function. Our criminal attorneys defend clients in municipal courts throughout Hudson County and New Jersey on a regular basis, including Hoboken, Jersey City, Kearny, Weehawken, Bayonne, Union City, and Secaucus. To learn more about how we can help with your defense in municipal court, call us at (201) 793-8018 or request a free consultation online.

What Types of Charges are Handled in New Jersey Municipal Courts?

You will not find individuals arrested for serious criminal charges, or indictable offenses, in a New Jersey Municipal Court. Crimes such as robbery, aggravated assault, murder, auto theft, and other serious matters are transferred to a Superior Court, not a Municipal Court. Municipal Courts are thus known as courts of “limited jurisdiction.”

Municipal Courts handle less serious criminal and traffic matters. These matters can include disorderly persons offenses or petty disorderly persons offenses—similar to misdemeanor offenses outside New Jersey—like possession of less than 50 grams of marijuana, shoplifting under $200 worth of merchandise, disorderly conduct. These charges are not indictable in nature but are still serious, as they can result in a criminal record and even time in jail. Driving under the influence (DUI and DWI) offenses are also heard and decided in municipal court. These courts also handle even less serious offenses like a barking dog ticket or a violation of a municipal building code. Some of these offenses, particularly municipal ordinance violations, do not even qualify as disorderly persons offenses, but are rather considered quasi-criminal or non-criminal in nature.

Do I Have to Appear in NJ Municipal Court?

Below is some general guidance on when you are required to appear in a municipal court, but the details included on your ticket and your jurisdiction’s Municipal Court always controls this information, and you should be sure to check both those sources prior to your court date.

If you are charged with a criminal offense in municipal court, a court appearance is always required. Criminal matters generally include violations like simple assault, drug charges, shoplifting, and the like. If you appear on a criminal matter, you can will need to enter a plea of guilty or not guilty. If you plead guilty, you will also be required to provide payment for fines in most cases.

Some traffic tickets include a checkbox next to the words “court appearance required.” If that box is checked, you need to appear at the time and place noted on the ticket. If that box is not checked, you do not need to appear unless you plan to go to trial, the charge is not listed on the statewide violations schedule (indicating that it cannot be paid at a court office or in the mail), or personal injury is involved. If you do not pay a traffic or some other tickets prior to your municipal court appearance date, you may have to pay late fees.
Traffic Ticket Trials in Municipal Courts

The most common offenses at issue in municipal courts are generally traffic tickets. If you wish to go to trial on a traffic case, you need to notify the Court Administrator five days or more before your scheduled court date (which is usually noted on the ticket). If you fail to give notice, you may have to come back for another court date so that the prosecutor will have time to prepare. Note that if you could have paid the ticket by mail, the court has the ability to impose a higher fine and/or court costs if you go to trial and lose, depending on the charge or ticket at issue, and the judge could also suspend your driving privileges. There are certain cases like driving with a suspended license, reckless driving, and drunk driving that you are best advised not to attempt to handle on your own. In fact, you would be surprised to learn of the severe penalties that may be imposed in municipal court, including up to 6 months in jail, thousands of dollars in fines and court fees, and driver’s license suspension that could last up to 10 years.

If you have been arrested and charged with a crime or issued a serious traffic ticket and have to go to municipal court, you should speak with an experienced criminal defense lawyer who can explain the process moving forward and discuss the options you may have. The lawyers at our firm have been successfully defending clients in municipal courts in New Jersey for years. Contact us today at (201) 793-8018 for a free consultation and get answers about your specific case.