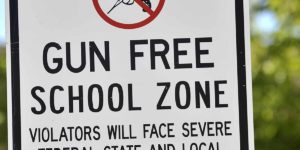 Gun-related crimes are treated very seriously under New Jersey law. If you live in the Jersey City area, or anywhere else in New Jersey, and own or possess a firearm, it is important to understand the law, your rights, and the potential penalties for gun-related crimes.

First and foremost, it is also critical that any firearm you own or possess in New Jersey be registered to you. You may not carry a gun on your person or keep one in your vehicle, your home, or on any other property unless you have the necessary permits. Having a gun without a valid permit to purchase or carry can lead to serious charges for unlawful possession of a weapon.

If you purposely or knowingly cause or attempt to cause serious bodily injury to another person with a deadly weapon, including a gun, you can be charged with aggravated assault—a third degree crime, which carries penalties of up to five years in prison and up to $15,000 in fines.

In New Jersey, criminal homicide, the purposeful, knowing, or reckless unlawful killing of another person, includes murder, manslaughter, and death by auto. First degree murder occurs if you purposely or knowingly cause death or serious injuries that result in death, or if a death occurs during the commission or attempted commission of certain serious crimes like kidnapping, robbery, sexual assault, arson, burglary, carjacking, criminal escape, or terrorism.

If you shoot a gun at another person, even if the individual is not actually injured or does not die from their injuries, you can still be charged with attempted murder, if there is probable cause to believe that you attempted to do so with the required level of intent.

Self-Defense with a Gun in New Jersey

In New Jersey, the use of force against another person is justified if you reasonably believe that such force is necessary to protect yourself against imminent unlawful force by another person. It is important to note that self-defense is an affirmative defense to the use of force (including use of a firearm), which requires your use of force to be objectively reasonable. This means that your use of force cannot just be reasonable in your own mind, but must also be reasonable, in light of the circumstances, to an average person. While an imperfect self-defense argument—where a murder charge is lowered to a charge of manslaughter if you subjectively believed the force you used was necessary to protect yourself against unlawful force by another person but it was not objectively reasonable—is not recognized in New Jersey, you may be able to use the same reasoning to argue that you did not act purposely or knowingly.

If you have been charged with a gun-related offense or need legal advice about your rights to own or possess a gun in Jersey City or elsewhere in Hudson County, New Jersey, contact experienced criminal defense lawyer William Proetta and the team at Proetta & Oliver right away. Our Jersey City office can be reached at (201) 793-8018 or contact us online 24/7 for a free consultation.