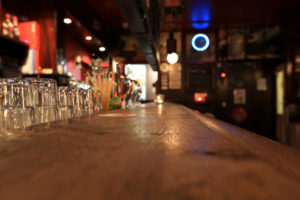 There are numerous bars, pubs, restaurants, and other night spots in the city Hoboken, making it a popular destination for people from all over New Jersey who are seeking a fun night out. With so many visitors and residents in downtown Hoboken every night, it is not surprising that sometimes, good nights go bad. Take the sheer number of people in a confined space and add to it lots of opportunities for drinking alcohol, and it is easy to see why criminal charges and fights occur in local bars and pubs on a regular basis. Bar fights are common inside of these establishments and equally likely to occur on the sidewalks and streets outside. When a bouncer removes a rowdy guest from a bar in Hoboken, issues may arise just outside of the door. In some cases, these incidents get police attention, turning into arrests and criminal charges.

Disorderly conduct, resisting arrest, assault, and underage drinking are the among most frequent charges that people face in and around bars in Hoboken, New Jersey. If you find yourself arrested at a bar, you need to know what the offense you are charged with actually means, the possible penalties if you are convicted, and the legal maneuvers that an experienced criminal defense lawyer can use to help you avoid them. Below, we explain some of the leading examples of criminal cases resulting from run-ins with law enforcement in Hoboken bars. To speak with a local Hoboken criminal defense attorney who can help with your charges, contact us at (201) 793-8018. Our lawyers have been handling Hoboken arrest cases for years with countless successful results. We are happy to answer your questions and explain your options in a free consultation, so call today.

Whether you came to Hoboken on the weekend or you are a resident who was just at one of your regular places with friends, chances are you didn’t plan to get arrested or face criminal charges. You’re not alone. This happens to locals and visitors all the time in the city, especially in and around bars, pubs, and restaurants during happy hour and the hours the follow. Obviously, with a ton of people out drinking beer, wine, and other liquor in the same place at the same time, you can see how things can change in an instant and go way too far. When police are there and something like a fight breaks out, or officers just so happen to be nearby, or someone calls police to respond to the scene of an escalating incident, one or more people will often be arrested at the same time. Here are a few of the top criminal charges that occur in and around bars in the area.

Charged with Disorderly Conduct at a Hoboken Bar

Disorderly conduct is perhaps the most common charge that people face in downtown Hoboken. This is considered a petty disorderly persons offense, which is technically the lowest-level criminal offense and will result in a criminal record. In New Jersey, any type of improper behavior, offensive conduct, or obscene language can result in a summons for disorderly conduct. For example, getting into a fight, disrupting others in a public place with loud or offensive language, or otherwise creating a disturbance constitutes a disorderly conduct offense. If you are charged with disorderly conduct in Hoboken, the charge will appear on a background check and you may be sentenced to up to 3 months in the Hudson County Jail, in addition to a fine of up to $500.

Assault Charge from a Fight Outside a Local Pub

If a fight happens inside a bar or pub, or you end up “taking it outside” with someone else, the altercation will typically lead to charges for either disorderly conduct or assault. In the case of assault charges, there are two different types of assault under New Jersey law: simple assault and aggravated assault. A simple assault offense is the lesser of the two, as it is considered a disorderly persons offense. Since it is basically a criminal misdemeanor, simple assault cases are heard in the Hoboken Municipal Court. There is no jury in a municipal court cases; instead, the presiding municipal court judge decides the case. If convicted, simple assault is punishable by up to 6 months in jail and a maximum fine of $1,o00.

On the other hand, when someone is seriously injured in a fight, a weapon is involved, or a police officer gets hurt when trying to break it up, simple assault becomes elevated to aggravated assault. This is a serious indictable offense which will be handled in the Hudson County Superior Court located in Jersey City. Aggravated assault charges vary in degrees based on the circumstances of the specific case. Depending on the degree of the charges, penalties range from 18 months to up to 10 years in state prison.

Got Arrested in Hoboken, What Should I do?

If you have been charged with a criminal offense in or near a bar in Hoboken, New Jersey, it is imperative to take an aggressive stance toward your defense. Criminal charges under any circumstances are an unwelcome immediate situation and often result in permanent problems if you do not have knowledgeable legal counsel. Getting help from the best criminal defense attorney can significantly improve the outcome of your case. Whether you have been charged with simple assault, resisting arrest, disorderly conduct, or another offense because of a night in Hoboken gone wrong, contact our skilled Hudson County criminal defense attorneys to find the defense you need. Call  (201) 793-8018 for a free consultation now or set up an appointment at our local offices.