Are all drug possession charges felonies in New Jersey? 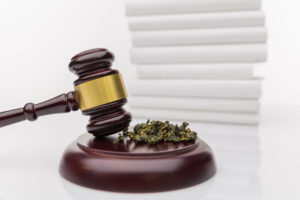 Many drug charges in New Jersey are considered felonies, or indictable crimes, and can require a state prison term if convicted. However, not all drug charges are felonies, as a select few are disorderly persons (misdemeanor) offenses allowing for county jail sentences.  The degree of the drug charges filed against you, the court you will attend, the potential consequences, and the available resolutions depend upon the type and quantity of the drug possessed. Your intent with regard to a controlled dangerous substance, whether illegal or possessed illegally, also plays an integral role in determining whether you are charged with a criminal misdemeanor or a felony for drugs in Hudson County and throughout New Jersey.

To discuss a specific drug charge filed against you or a loved one, contact our skilled team of Hudson County drug possession attorneys today. We can be reached at our local Jersey City office at (201) 793-8018 or contacted online to provide you with a free consultation.

The above cases will be heard in municipal court unless they are attached to a felony indictable crime.  For instance, often a person who has been charged with felony possession of heroin will have paraphernalia on them at the time of the arrest as well (i.e. a bag, needle, straw). If you do possess a minor amount of any illegal drug, aside from marijuana, you will be charged with a felony and the paraphernalia charge will be carried with it to the Hudson County Superior Court.

Aside from the above, other cases involving possession of drugs listed as a controlled dangerous substance are typically felonies. Felonies filed in the Superior Court are either first, second, third, or fourth degree offenses. The level of crime depends upon the amount of the drugs possessed and the suspected intent.  For example, if you possess more than 50 grams but less than one ounce of marijuana, you will be charged with a fourth degree felony possession crime.

For drugs creating more severe chemical dependency than marijuana, the degree of the crime will be higher regardless of the minor amount possessed. For instance, small amounts of cocaine, heroin, methamphetamine, MDMA, or LSD possessed by anyone in New Jersey are third degree crimes. The crime rises to a first or second degree if larger quantities are possessed, usually with intent to distribute.

Charged with Drug Possession in NJ, Will I go to Jail?

A conviction for either a disorderly persons offense or a felony drug offense allows the judge to send you to jail. In New Jersey, the length of the jail sentence imposed and severity of other penalties depends upon the degree of the crime.  The higher the level the crime (first being the most severe), the lengthier the jail term.  The possible jail terms for misdemeanor and felony drug charges are:

Despite the above sentencing outline, not all cases involving convictions for drug charges will result in prison or jail.  Often, people coming to court are first-time offenders, in which case the court is not required to send them to jail at all.  This is true for misdemeanors, as well as third and fourth degree crimes. Conversely, this is not the case when convicted of a second or first degree crime in New Jersey. In these cases, the court must abide by a presumption of imprisonment. Aside from possibly getting into Drug Court for a repeat or more serious drug crime, state prison time is presumed if found guilty of a first or second degree crime.

Can you get out of a CDS possession charge?

It is important to note that there are a myriad of ways to resolve a drug case to avoid jail or a criminal record. For anyone who has never had conviction or who has not had a prior diversionary discharge or dismissal, Pre-Trial Intervention (PTI) or a conditional discharge may be available. These diversionary programs allow you to forego criminal prosecution by giving you a set of conditions to meet within a specified amount of time. If successful, the charges are eventually dismissed, which will be reflected on your record. In Municipal Court, the diversionary program that can resolve a drug case is called conditional discharge and in Superior Court, it is known as Pre-Trial Intervention.

Of course, not everyone is eligible for a diversion and there are other potential avenues that should be explored. For instance, third and fourth degree drug charges may be resolved by way of probation. In other cases, issues with evidence or police procedure pave the way for a dismissal of the charges altogether. Getting an honest, thorough assessment of your case is the best way to ensure that you know every option available to you and the pros and cons of each.

If you have been charged with a drug offense, contact our office at (201) 793-8018 to speak with an experienced Jersey City drug possession defense lawyer free of charge. We will explain the entire court process and if you enlist our help, will doggedly represent your interests to achieve superior results. Regardless of whether you are facing drug charges out of Kearny, Union City, Bayonne, Secaucus, Weehawken, or a surrounding community in Hudson County NJ, we encourage you to contact us for a free consultation today.