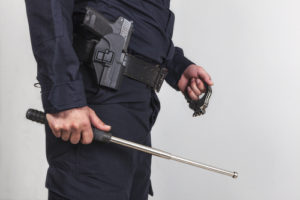 This is one of those crimes that is rarely charged but when it is, it always comes with some serious repercussions. Any attempt to disarm a police officer or correction officer is automatically a second or first degree crime depending on the exact circumstances. That means you could face a presumption of state prison incarceration for up to 20 years even as a first time offender. These cases almost always arise from disorderly conduct, resisting arrest or aggravated assault on a police officer charges and then quickly become drastically more serious if the police officer alleges that you attempted to gain control over his weapon during the struggle. This drastic difference between a disorderly persons offense and a second degree crime can create a very problematic dilemma especially when you consider most resisting arrest struggles involve intoxicated defendants with little memory of the incident and who normally claim they didn’t realize they touched the cop’s gun or baton. For this reason, these cases are normally hotly contested especially if the prosecutor’s office is not willing to downgrade the charges.

What Does The Law Say?

1. a. A person who knowingly takes or attempts to exercise unlawful control over a firearm or other weapon in the possession of a law enforcement or corrections officer when that officer is acting in the performance of his duties, and either is in uniform or exhibits evidence of his authority, is guilty of a crime of the second degree.

b. A person violating the provisions of subsection a. of this section shall be guilty of a crime of the first degree if:

What Must The Prosecutor Prove To Find Me Guilty?

In order for a jury to find you guilty of the crime of disarming a law enforcement officer, the State is required to prove each of the following elements beyond a reasonable doubt:

In order to prove that you attempted to exercise unlawful control over the weapon, the State must prove beyond a reasonable doubt that you purposely attempted to exercise unlawful control over the weapon. It is important to note, that the nature of the purpose with which the defendant acted toward the officer is a question of fact for you the jury to decide. “Purpose” is a condition of the mind which cannot be seen and can only be determined by inferences from conduct, words or acts.

It is important to note that although many people jump right to the conclusion that disarming an officer means taking his gun and that is not always true. In fact a “weapon” can mean various things including a taser or baton. For purposes of a potential defense, it is especially important to consider situations where an officer may be using his or her baton to subdue a defendant during an incident of resisting arrest. In those situations, in particular, it may be a valid defense that the defendant grabbed the baton in order to try and prevent the police from hurting him any further. This defense is analogous to the defense for resisting arrest. No matter what the particular facts of your case might be, it is paramount that you have an experienced criminal defense attorney review your case and strategize a defense or game plan for you moving forward. At Proetta & Oliver we offer a team of experienced criminal lawyers who care about their clients and their results. To learn more about how we may be able to help you, contact our office today at (201) 793-8018 for a free consultation.